How to stretch hip flexors

In this article, we wanna go more in depth with the analysis of the hip flexors in order to understand firstly where do they originate in the human body and how you can stretch them with some of the best stretching exercises deputed to that.

Let’s briefly analyze the hip flexors and start by saying that, since they’re made of different muscles, as you can see from the picture below: 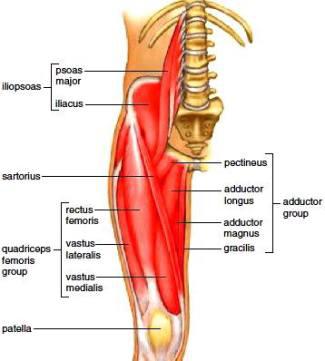 We are going to sum up real quick the three main ones, that are:

As you might understand already from this brief analysis, these three main parts are all, directly or indirectly, connected with the spinal column, the vertebrae and the legs.
This explains why when you feel stiffness, aches or pains in your back, these symptoms might originate from a different area of the body like tight iliopsoas, hips or inflamed Sartorius.
This fact, allows us to understand where to focus our hip flexor stretching routine so not to waste time in trying multiple exercises, without pointing directly to the main goal.

Let’s see now how we can stretch hip flexors in order to avoid or diminish the chances to create a possible strain in them as well as hip pain, by finding out which are the most common hip flexor stretches.
Since of course the range of exercises we could adopt would be too huge, here we are going to sum up the most important and effective ones that are helping to strengthen the hips and provide them with a better mobility/flexibility:

1. KNEELING HIP FLEXOR STRETCH: probably the most common type of hip stretch that targets perfectly the iliopsoas and the hips more in general. Start from a kneeling position on the ground, you can place your hands at hips’ height and put forward one leg while the other one provides support on the knee (both legs are initially bent in a 90° angle).
Start slowly to lean forward and feel the intensity of the stretch you provide to the iliopsoas firstly as well as to the hip that projects the tension down to the ground.
You can perform this exercise in isometric way or dynamic one; in both cases make sure to maintain a correct posture of your back straight while leaning forward. 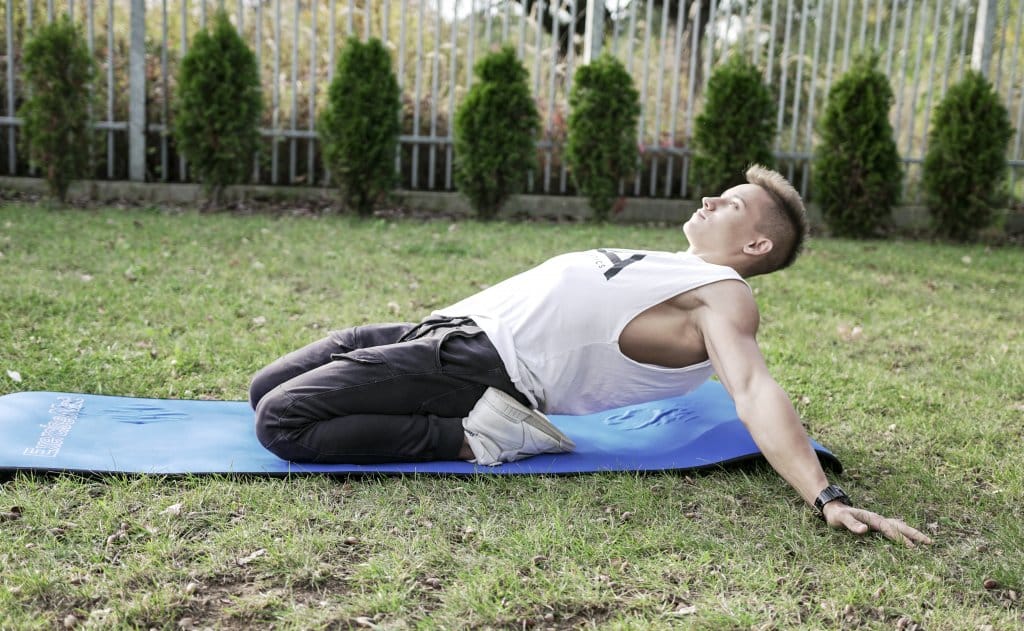 2. KNEELING HIP FLEXOR STRETCH AGAINST A WALL: as a variation of the previous exercise, in this case with the assistance of a wall, you can emphasize the stretch provided to the hip as well as to the iliopsoas.
Make sure to perform this exercise always in progressive and controlled way as the tension generated by placing your instep on the wall is higher and you wanna avoid to generate any strain in your quads

3. BUTTERFLY STRETCH: another very common exercise that provides a very effective stretch to the hips, but its intensity depends on you.
Butterfly stretch can be performed in different ways.
The most common one sees you opening the legs bent in a butterfly shape and here you can decide if perform it in static way, by placing the elbows on both knees so to slowly open up the hips, or in dynamic way and in this case by simulating a butterfly wings movement with the knees.
The other way you can perform this exercise, focuses on isolating even more the hip stretch, by placing one hand on the respective knee so to extend one hip/iliopsoas at a time.
Butterfly stretch, in general, is a type of stretch often underestimated and performed in occasional way.
If you focus on keeping one knee down to the side with one hand placed on top of it while the other one is placed on the ground to the opposite in order to create a sort of “point of pressure”, the tension applied will change completely

4. FROG POSE STRETCH: with this exercise, the intensity of the stretch is quite high, indeed it is recommended to be very delicate while taking into position already, with legs opened into a frog stand. Place your hands firmly in front of your body so to control the movement while lowering and opening your hips down towards the ground to the sides.
Hold the position while breathing with your diaphragm and repeat after taking a short break in between the sets

5.PIRIFORMIS STRETCH: this stretch is particularly indicated for alleviating the aches and pains generated by inflamed sciatic nerve and general lower back diseases (i.e. slipped disc). Perform this exercise by laying on the floor supine with head on the ground as well (do not elevate it while performing the exercise).
Grab one knee bent by clasping both hands around it and place the foot over the opposite leg; bring it towards your chest and bend the other leg in a 90° position while elevating it. 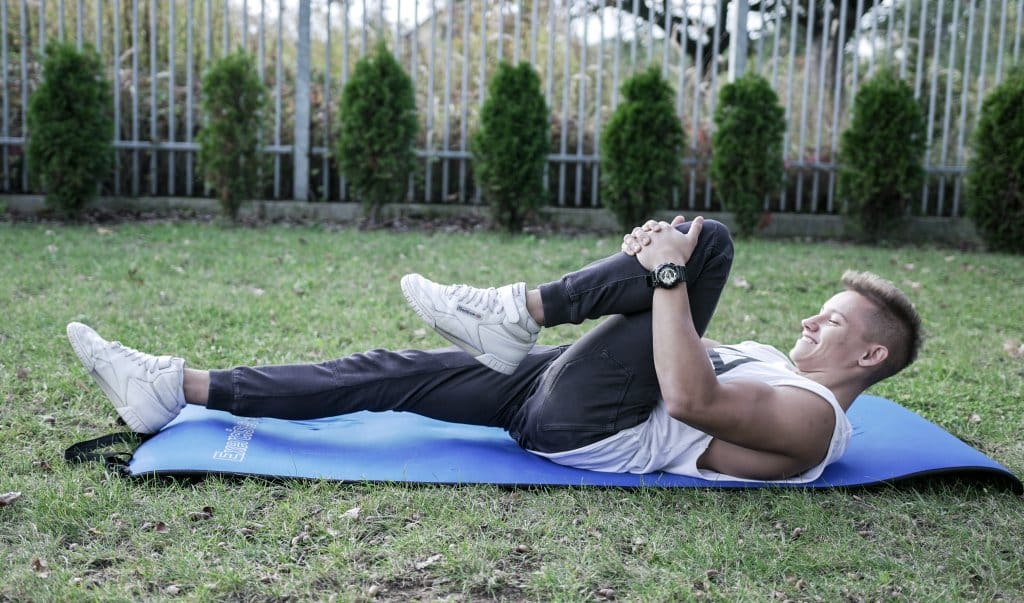 6.SEATED PIRIFORMIS STRETCH: as a variation of the previous exercise, you can perform the same movement by also sitting on a chair with back straight at the beginning.
Start slowly to lean forward following a straight line, while maintaining the hip opened correctly so to provide an effective stretch

7. PIGEON POSE FACILITATED: it’s a very common stretch coming from Yoga and, together with the previous piriformis stretch, represents the second specific exercise to alleviate general aches and pains typical of the sciatic nerve, lower back and hips.
I take here advantage to say indeed that, I highly recommend you to try performing these two exercises in a row, one after the other so to make the sequence very effective.
It particularly emphasizes the stretch of the hips in this variation since you have to sit on the floor, fold one leg to the inner side of the other one that is folded too, but pointing at your back.
From this position, start slowly to lean forward still in a straight line helping yourself with both hands (on the ground) in order to control the movement

8. PIGEON POSE: the final version of the previous exercise is differentiating because of the fact that, instead of having one leg folded in the back, this time is completely extended while the other one is under stretch in front.
The back has to be straight, but you can decide if leaning forward with it so to increase the intensity of the stretch or simply maintaining that sitting position on the leg folded in front.

9. HIP BRIDGE: this kind of stretch is once again targeting lower back, hips and iliopsoas since, while laying down supine on the ground, you have to lift up your butt while squeezing your glutes and keeping hands and feet on the ground as well

10. HIP BRIDGE REPETITIONS: like for most of the stretches, also the previous one that is an isometric can be performed in dynamic way.
This time instead of keeping your butt up while squeezing the glutes, repeat the movement of elevating and lowering it repeatedly for repetitions 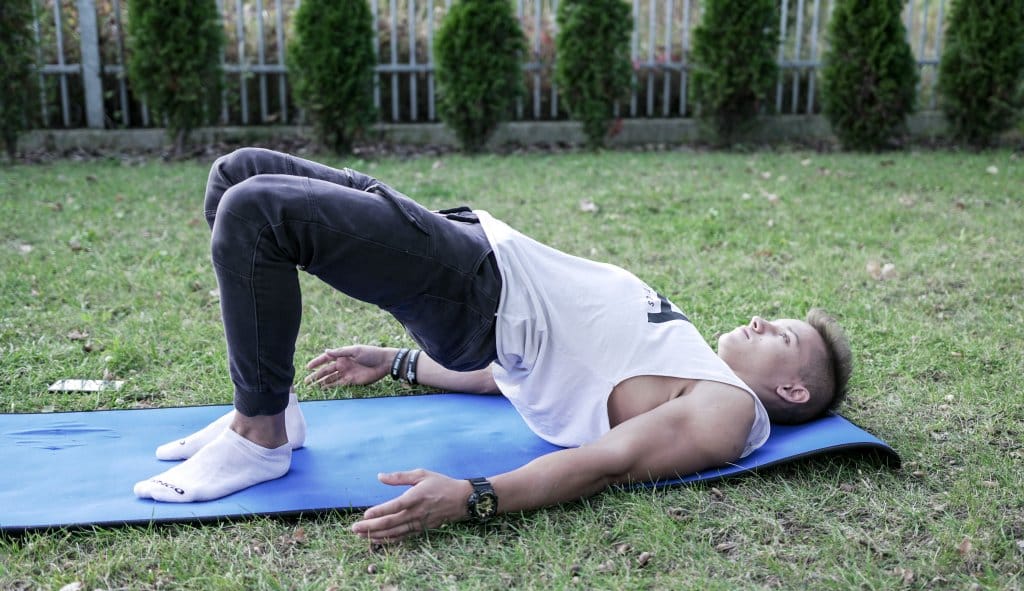 11. ONE-LEGGED HIP BRIDGE (STATIC-DYNAMIC): another variation of the hip bridge; in this case instead of elevating both hips together you elevate one at a time, hence one leg at a time as well.
Of course it can be performed as an isometric movement or as a dynamic one, in both cases just make sure to keep both hands and one foot at a time firmly placed on the ground so to have two solid points of pressure

12. LIZARD POSE : this type of stretch is specific for the hips, comes from Yoga and is very effective.
It requires a high level of mobility hence it cannot be performed immediately by a beginner.
A lot of practice and most of all a sufficient ROM of the hips are the basic requirements, in order to perform it correctly.
Its execution starts from a kneeling position, one leg goes forward and is then bent into a 90° angle, the other one instead is completely extended to the ground.
While placing both legs in their respective position, lean forward and lower your upper body to the inner side of the leg bent so to be able to approach the ground with both hands, if not entirely with both forearms once into stretch position 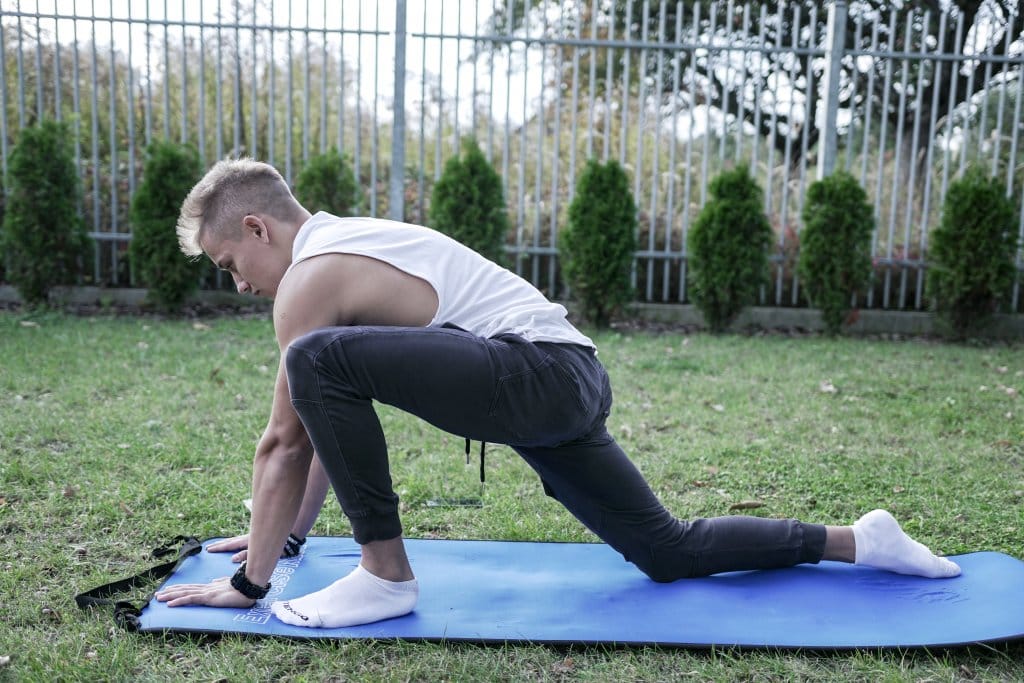 Once again, with regret, we have to stop here the list, otherwise it could go on “for ages”.
We don’t wanna make it too huge, but just make sure that, with these main exercises provided you are capable of start working better on your hips mobility.

Said that, it’s now your time to practice and focus!