How to do a Human Flag

Caliathletics fam! Welcome back and get ready for another awesome article! This time we are going to analyze in depth how to do a human flag.

Human flag is probably one of the coolest skills of Calisthenics because of its aesthetics, because it’s a nice example of strength and last but not least, is one of the skills where a lot of mobility and form are needed (as always).

In order to perform the human flag correctly without imbalances, since you are performing it in a whole new concept of space, you gotta work through different levels so to achieve it progressively.

Human flag together with the handstand and V-sit, are skills kinda “independent” from all the other main ones typical of Calisthenics.

To achieve them indeed, you can work your way through in separate sessions not included in your daily workouts; if for instance you are training on Monday/Wednesday/Friday, on Tuesday and Thursday you can consider including a whole separate session for Handstand and Human Flag for instance.

For sure, we can enlist three main elements that are representing the very primal requirements of the human flag, and so the ones on whose you have to work on:

STRENGTH: the first thing to focus on is the strength that the human flag requires in order to be able to elevate on a side your body.

Here for strength we mean the one that comes from your lats, shoulders and core

FLEXIBILITY: in order to perform correctly a human flag, you must be flexible in your shoulders since the final form implies to form a straight line after elevating your body on a side

MOBILITY: increasing shoulder’s ROM is for sure another goal to achieve in order to facilitate the whole learning process of the human flag.

The wider the ROM, the better and easier each exercise gets.

For these two lasts requirements, I can suggest you to start working on your shoulders mobility by using a stick or broomstick and combining it with exercises that are helping to stretch and so to increase their flexibility as well.

Since there are many exercises deputed to do so and since it’s fundamental to show each one of them in their execution so that you can learn and carry them with you no matter where you are; we are going to cover everything more in depth in a whole new dedicated program available soon on our website.

BASIC EXERCISES YOU HAVE TO MASTER

Because of these features, the basic exercises you have to start working on, that can lead you to perform a human flag without causing injuries in your shoulders are as follows:

Being a very intense lever to perform, which requires the best awareness of where your body has to be once elevated, you gotta have the proper levels of strength in your lats to keep the whole body in that lever

Of course, handstand push-ups as well as planche push-ups, are the ones mostly indicated, talking of effectiveness in increasing the strength

To perform this exercise you can start on your elbows and, a bit more advanced, on straight arms with straddle legs

Also in this case, it can be executed on the elbows per each side and, in a more advanced way, with straight arms, but with legs together (not in straddle position as before)

To do so, you should firstly be very careful to the position of your wrists, elbows and shoulders while approaching this type of hold.

Being this one, the very first exercise typical of the human flag, it is highly recommended to approach it together with all the others we are going to analyze below, firstly on a stall bar rather than on a pole. 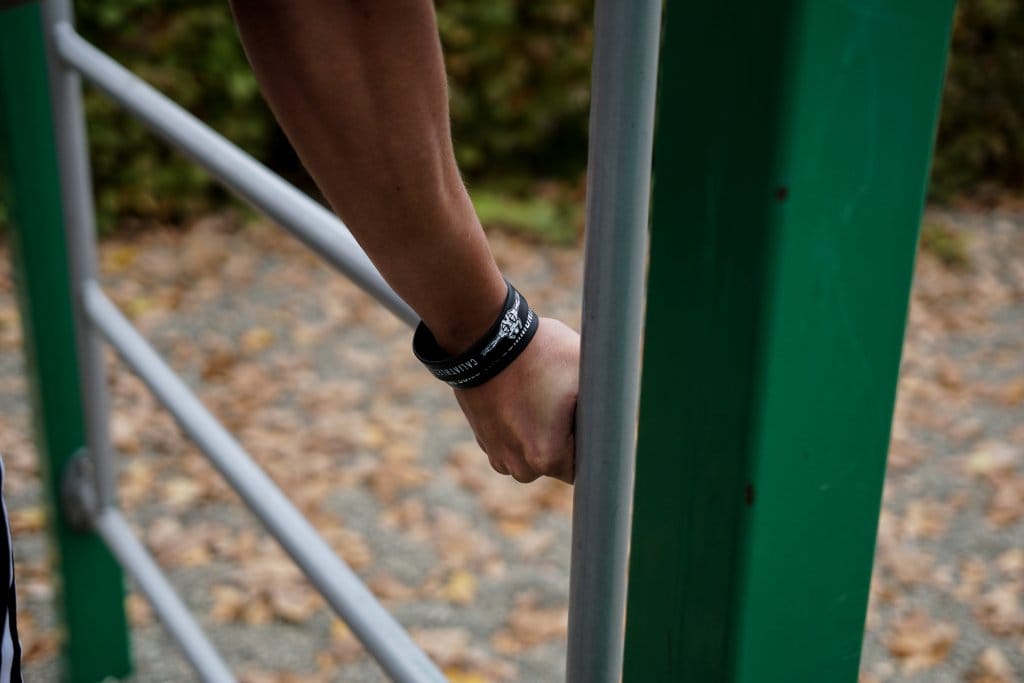 The main reasons are:

When approaching these two very first types of human flag holds, the fundamental features (as we have just mentioned above) to pay attention to, are the position of your elbows, arms and shoulders:

They must provide a solid form to your upper body and both hands must be in line one another as well!

Of course, it is also important to emphasize fact that, before getting into whichever hold or dynamic exercise explained here, it’s implied that the arm that is at the lower side starts from a slightly bent position.

In this way, it’ll be able to help the shoulder and lat to push up the upper body and help as well, to the opposite side, the upper arm which pulls and holds the human flag.

If you bend instead the upper arm, while holding the human flag in whichever progression you’re working on, this is a very incorrect/bad form! Avoid it since the beginning!

Another mistake is, if you place for instance, the upper hand in a point and the lower one in another while using a stall bar, noticing that they’re not in line; this will cause, once executing the press, an asymmetry and so the chances to injure shoulders and wrists.

To avoid that, always check firstly the position of your wrists/hands and then make sure to lock your elbows in so to keep arms always straight!

In this way, you provide mainly shoulders and lats, with a whole new motor pattern so to give a new stimulus to the CNS.

Just make sure to keep always arms straight, hence before starting the transition as well as after when you get back into the front press hold.

After mastering correctly each one of the exercises enlisted above, you can proceed with the next list that shows which are the ones we can consider intermediate-advanced in terms of difficulty of execution:

Why?! Because in order to hold this position, you must firstly face the stall bar so to grab it with both hands.

In order to push yourself upside down you have to perform a kick with one leg, usually the one not in line with the arms since the other one touches the ground.

While doing that, you have to rotate your hips up while flexing the legs towards your chest, so to have a solid hold while pointing your body in direction of the ceiling.

Arms are straight with elbows locked in and core tight; the goal is to hold the position for at least 15/20” in this first form and then, in the more advanced one, which sees legs fully extending towards the ceiling so to have another first approach to the human flag hold needing now to keep the full hollow body

In order to do so, is up to you choosing which progression of the human flag to use, hence tuck, advanced tuck, one leg, straddle, half-lay or full form so to keep always a good hollow body and arms straight with elbows locked in. 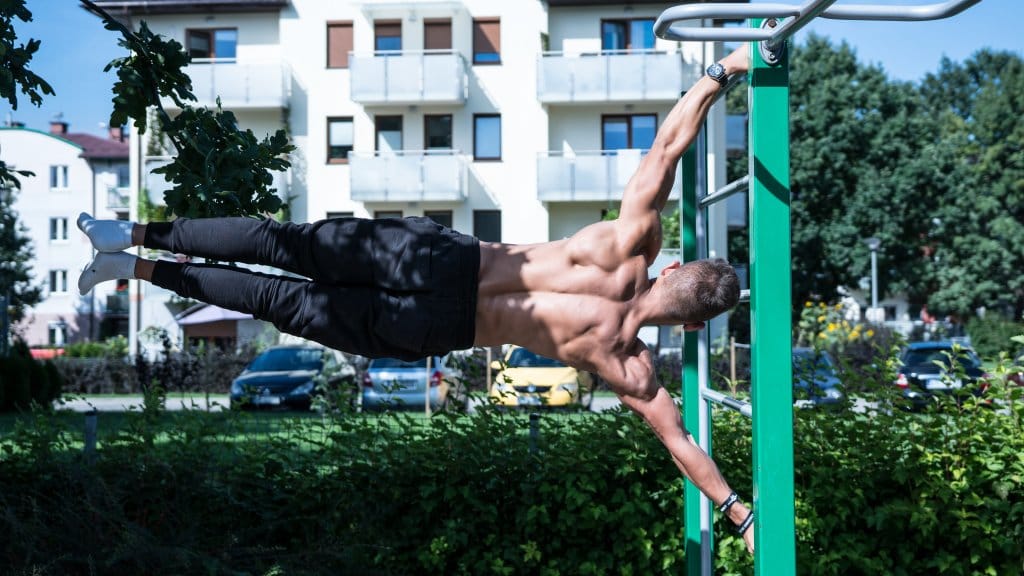 In this case, starting always from the inverse block hold on a stall bar, the goal is to be able to lower your legs and, this time, let the body reach the ground side completely before coming all the way back to the initial position, in the slowest way possible and then repeat all over again.

Worthless saying that, also in this case, which level of difficulty to choose while performing the negatives is up to you, hence choosing among tuck, advanced tuck, one leg, straddle, half-lay or full form is up to your actual strength without lacking of form.

The target here is about 3-5 sets and the total amount of seconds is up to you as well; I’d suggest at least 10-15” each negative.

To perform human flag bursts you have to kick your legs up so to get into the typical full human flag hold for few seconds, before dropping down and repeat the whole movement again.

Here the very important elements to pay attention to are:

To perform this exercise you have to get firstly into a front support press with shoulder depressed, elbows locked in and both arms this time already straight.

From the front support press, you have to push and rotate so to get into a side support press while holding the hollow body so to reach the full human flag at every repetition.

Ok guys, I think the two lists above are enough to let you understand the concept that, it is not sufficient to be able to hang on a pole or a stall bar and try to perform a human flag having totally arched back and elbows bent.

You must always look at every single skill with a different approach that is:

How can I achieve a skill without getting injured on the way (or at least reducing drastically the chances that could happen)?!

Which would be the best steps/progressions to follow in order to achieve it having a good/perfect form?!