Dear Caliathletes! You are going to be introduced to a new tutorial that will teach you how to perform correctly the famous archer pull-ups and which purpose they have as a compound exercise.Let’s get straight to the point!

THE PURPOSE OF THE ARCHER PULL-UPS AND CHIN-UPS 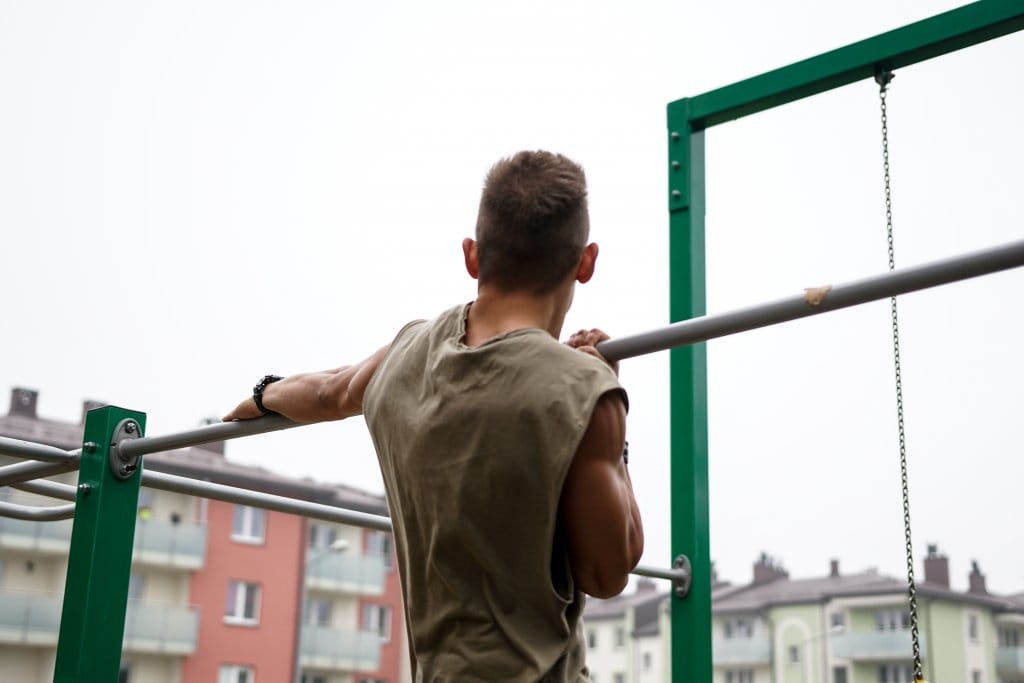 As you all may probably already know, archer pull-ups are a great exercise that allows you to focus more on developing the single arm pulling strength.

Their general purpose indeed, if performed correctly, is to increase the overall strength that each arm is able to generate while performing most of the pulling exercises.

More in detail, if you aim to learn the OACs (One Arm Chin-ups) and OAPs (One Arm Pull-ups) for sure this exercise represents one of the most basic and fundamental ones in order to approach, later on, the eccentrics as well as the isometrics of the OACs and OAPs, hence supinated and pronated.

Like most of the pulling exercises, of course it would be recommended to start with the easier grip, that is the supinated one indeed so to approach firstly the archer chin-ups.

Once you become more confident with the movement, then you can consider starting to work on the harder and final version that are indeed the archer pull-ups with pronated grip.

SHALL I PERFORM THEM FIRSTLY ON THE BAR, OR ON RINGS?!

Not to mention of course the importance of approaching such exercise maybe firstly on rings and later on, on the bar.

Contrarily to what people usually do and think, that is approaching most of Calisthenics exercises on the bar, I go totally the opposite and I push you once again to consider approaching instead the rings, first thing first.

The reason is that, first of all rings are a great strengthening tool that allows you to work much more with your stabilizer muscles, hence making more effective the way of executing each exercise.

If you think for a while about how can be performed archer chin-ups on a bar and on rings, you probably find out that on the bar wrists are firm and they cannot move, hence forcing to use more pulling strength in order to go above the bar with your chin and consequently extend the supporting arm at the opposite.

On rings, situation is slightly different, because of the wider range of motion they provide allowing you to rotate your grip starting from a pronated one and ending into a supinated one.

Performing the archer chin-ups on rings allows you to go with your chin above the ring itself with the supporting arm finding an easier way to extend in order to provide the required balance.

For these reasons, I highly recommend you to start with archer chin-ups on rings and become strong enough to perform per each arm 3-5 sets of 6-8 reps.

Once you reach a 3 sets x 8 reps, then you can also start working of course on archer pull-ups on rings and eventually starting to combine them with the execution on the bar. 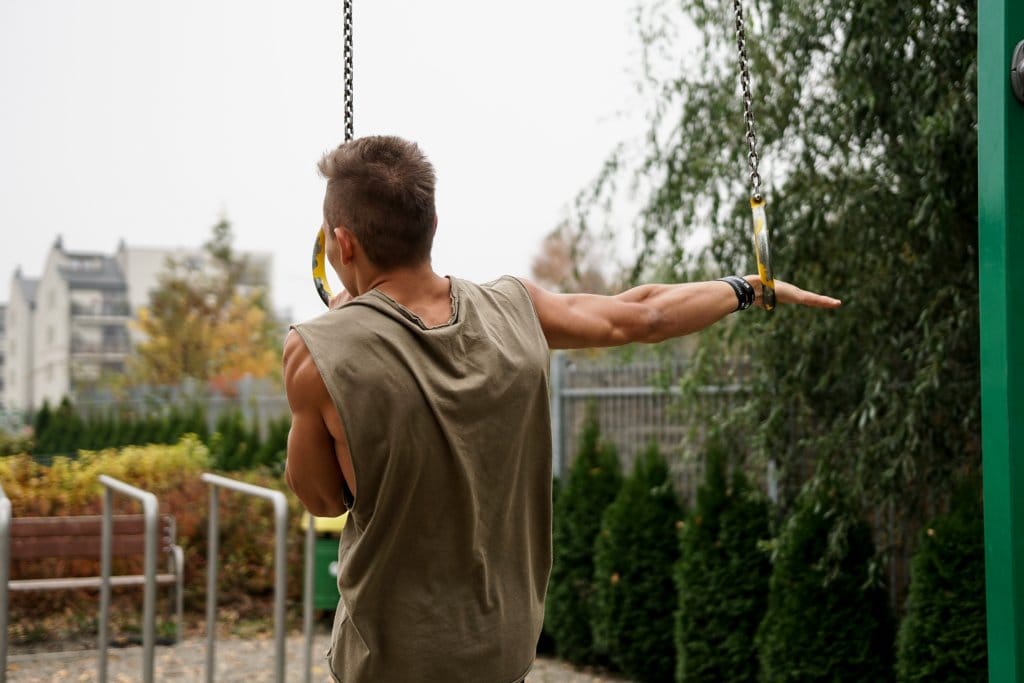 HOW TO PERFORM ARCHER CHIN-UPS / PULL-UPS

Let’s talk about how to execute correctly firstly archer chin-ups and then moving on archer pull-ups.

First of all, like I said before, consider approaching the archer chin-ups on rings; if you don’t have a pair grab one! YOU WON’T REGRET IT!

Grab both rings with a pronated grip, make sure to dead hang completely, possibly without having your feet touching the ground and with legs straight.

In this way, you are able to work much better on using your own bodyweight, since having your legs bent is either correct, but not as much as having legs straight (same principle of executing chin-ups/pull-ups on a bar, with legs straight, never bent).

At this point, make sure to start the concentric phase, by firstly allocating your shoulder blades.

Like most of the pulling exercises and in case of one arm pulling ones even more, is fundamental to preserve the health of your shoulders by isolating them from the stress coming from the pulling movement.

This is the reason why, before actually starting to pull yourself up, make sure to allocate the shoulder blade of the arm that is going to pull, so to focus much better on the single lat strength.

Said that, once you start the concentric phase, aim to switch your grip from the initial pronated ending into the supinated one at every rep, moment in which your chin has to be above the ring and the arm bent as close as possible to your chest.

In this way, you can work better on developing your forearms and wrists conditioning as well as strengthening your grip, things that you can partly do on a bar.

While performing the concentric phase, the supporting arm is going to provide balance by extending on a side actually pushing away from your body the other ring, until it reaches its full extension.

That’s the way it should be executed one repetition of archer chin-ups on rings, before coming of course all the way back to the initial position and repeat all over again.

If we look at the execution instead on the bar, well the main difference lies in the fact that contrarily to the ring movement, where the grip switches from a pronated to a supinated one at every rep, here the bar restrains such ROM.

This means that, before starting the repetitions, the hand of the arm that is going to pull will have a supinated grip all the time.

The supporting arm instead, will have to do a bigger effort In order to reach a point above the bar so to lay on it and its hand is pronated sort of, even if in this case the palm has to be fully opened so to provide support.

Since the ring, like we said, moves away from your body while pulling with the other arm, with the bar things changes because such arm will have to provide support by going all the way above it.

Either you perform archer chin-ups on rings or on a bar, the movement is simultaneous while pulling, this means that while you pull yourself up with one arm, the other one moves away from your body reaching that support position needed.

As you can see, in case of rings will be a bit easier, because of the bigger ROM they provide, compared to the one on the bar where you have to pull yourself more up so to lay with the arm on it. 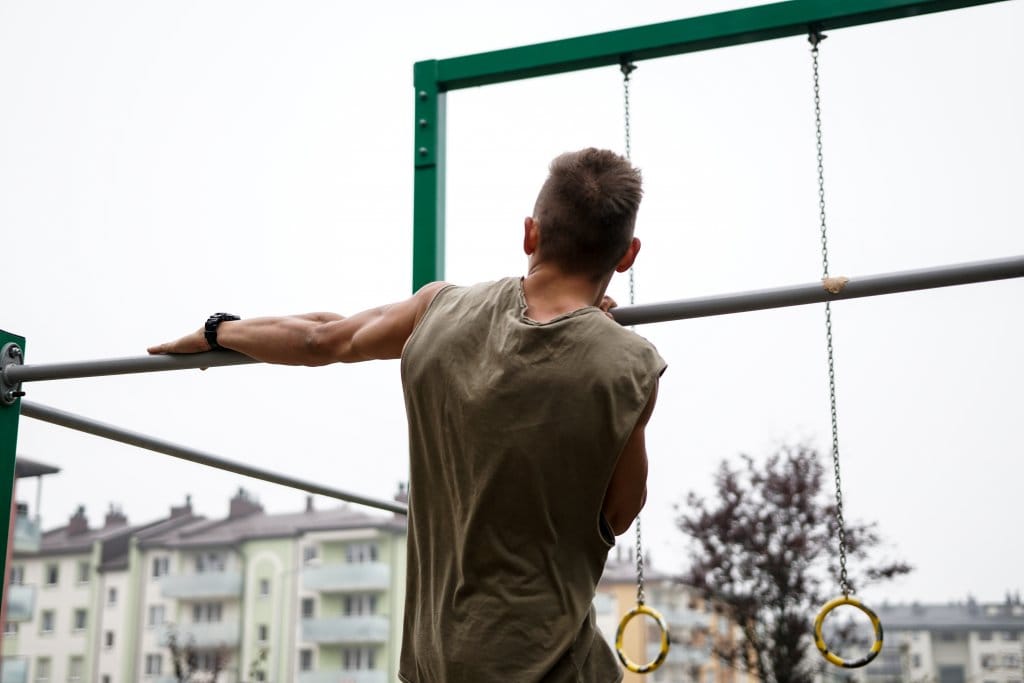 Archer pull-ups instead wants you to perform the movement we just analyzed, but of course with a pronated grip.

Make sure to hang on rings or on the bar always with a dead hang and both hands pronated, legs possibly straight, shoulder blade allocated and only after you can start the concentric phase.

On rings, the execution is the same as for the archer chin-ups, but in this case, there is no switch from a pronated to a supinated grip during the concentric phase.

One important particular is the fact that, in case you perform archer pull-ups on a bar, arms have to be at an equal distance far enough to allow the pulling one to pull yourself up on one side, providing enough ROM to the other one in order to extend it all the way on top of the bar.

This initial “adjustment” is very important in order to perform this particular exercise correctly so to develop that one arm pulling strength we talked about above.

NO NEED TO THINK OUTSIDE THE BOX, SIMPLY REALIZE THERE IS NO BOX!