Chin up vs pull up

Well, the title is kind of self-explanatory.

To chin up or to pull up?

That is the question, isn’t it? Unfortunately, none of this two exercising techniques is evidently superior. So this article won’t tell you which one is better or more effective, it will only describe to you the most prominent differences between chin ups and pull ups. Then you’ll be able to judge by yourself which one will suit you better, or – more precisely – how to include each of this exercises into your workout plan. But first, let’s just go through the exercises’ proper form: doing a pull-up or a chin up, you’re to grip the bar and hang with your elbows locked and arms straight. Pull yourself up to your neckline, and remember to do this using only your shoulders, back and arms.

Do not help yourself with swinging your legs. And don’t pull yourself up any higher. That will put your shoulders under too much stress, and you may risk injury. Lower yourself in a controlled manner until your arms are straight again. OK,
the bases are covered. Let’s proceed to the comparison.

And here’s the most pronounced difference between a chin up and pull up. With a chin up you have a supinated (in other words – underhand) grip, which means that your palms are facing you. The width of the grip is most commonly shoulder length width. 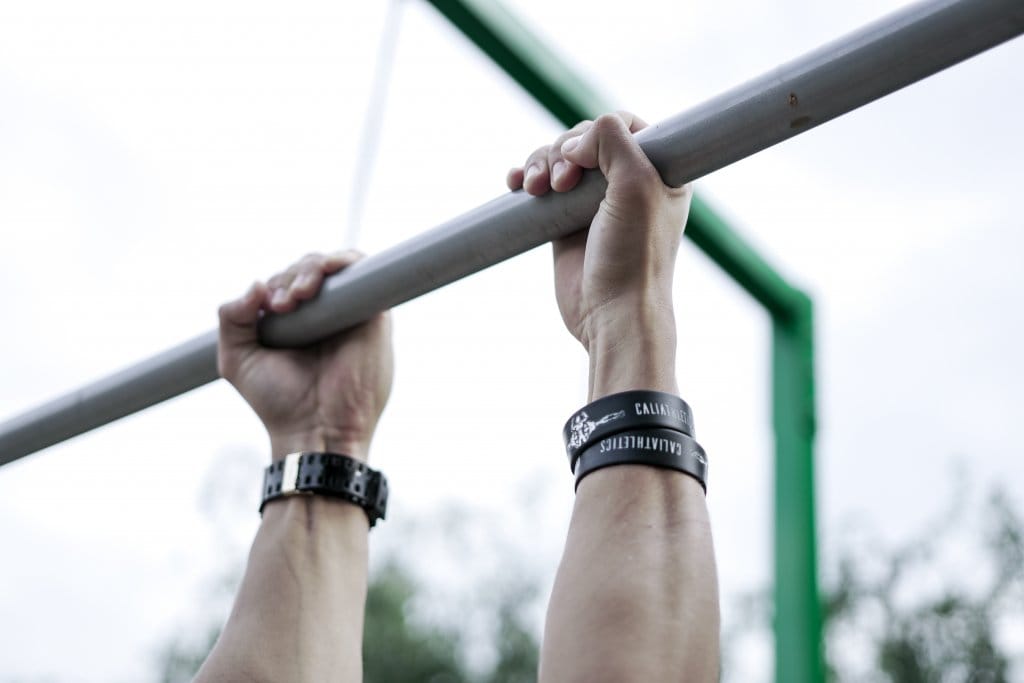 When it comes to a pull up, you have pronated (which means overhand) grip with palms facing away from you. And the width of the grip is
most commonly just a bit wider than shoulder width. 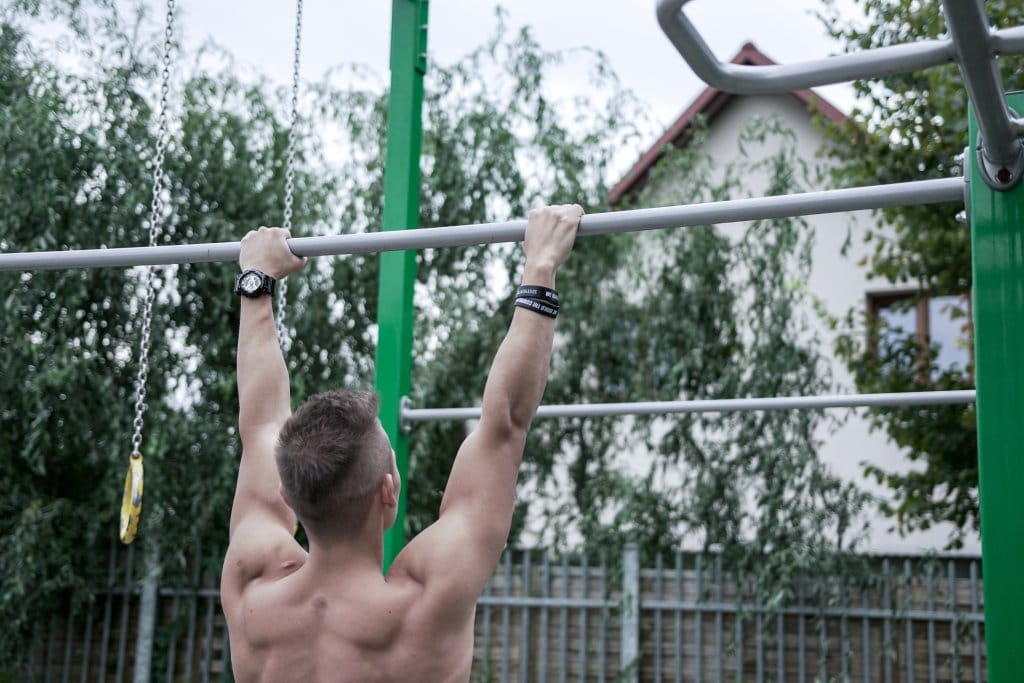 There are also a few grip variation, but here we’ll name only one: a neutral grip with palms facing each other. And here’s the thing – It’s not wise
to make the grip too wide. It can strongly increase the risk of shoulder injuries as the wider the grip gets, the narrower the range of motion becomes. Some people claim that chin up grip is less stressful
on their shoulders so that they would recommend it. 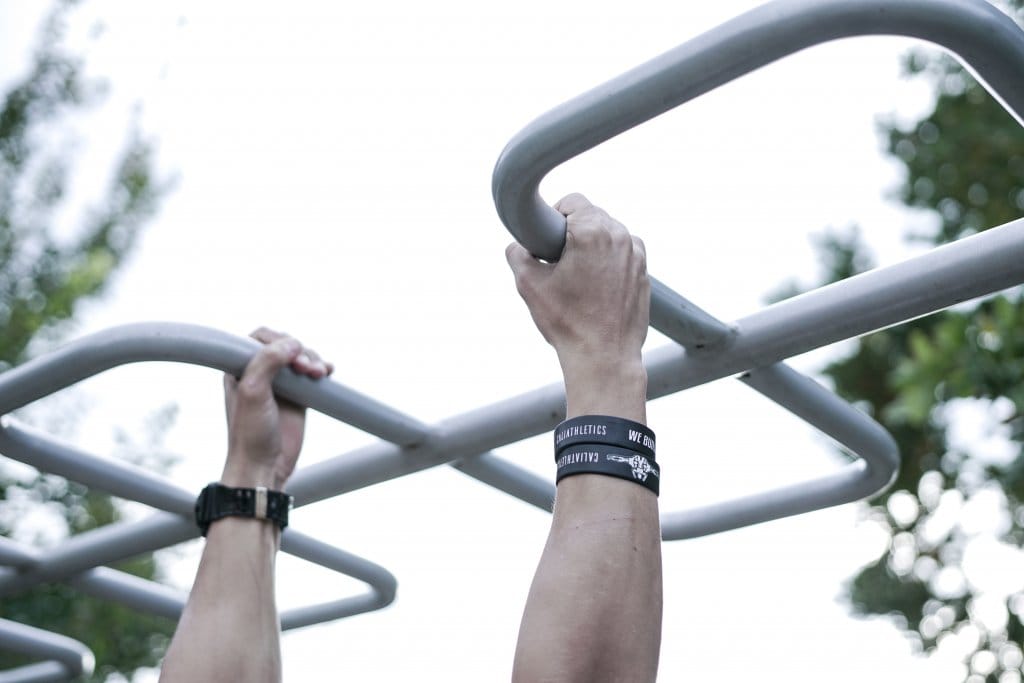 Other people would back up the pull-ups, stating that chin up grip is at the same time less comfortable for wrists and forearms than the pull-up grip. So, it all depends on your condition and possible problems you may have and whether you’d prefer for some reason to spare your shoulders or wrists.

Generally speaking, chin-ups require less strength than pull-ups. That’s because they put the biceps in a stronger line of pull. Consequently, as a beginner you should find it easier to perform a chin-up than pull up, so – if that’s your situation – it might be a good idea to start with chin ups and after a while proceed to pull-ups. And don’t be surprised – in the beginning, you won’t be able to perform as many pull up reps as you could with chin ups. If you’re worried whether you’re strong enough to perform a pull-up or a chin-up take a look at the end of this article where you’ll be presented with very effective prepping exercises which will make you ready for either chin ups and pull ups.

First some similarities – both exercising techniques work in a vertical pulling movement plane. Both of them target the back (or to be more precise – the lats) and biceps. BUT. Pull-ups use shoulder adduction (so the elbows come down and back from the sides) and chin-ups – shoulder extension (so the elbows come down and back from the front). So in each case, the lats do the work, but the
muscles movement during a pull up is different than during a chin up. So, if your goal is to build muscle or get stronger, it might be a good idea to use both exercises in a complementary way and include them in your workout plan evenly. For example, do chin-ups for eight weeks and then pullups for the next eight weeks. Whatever you decide, remember to include a pulling exercise to your workout routine. 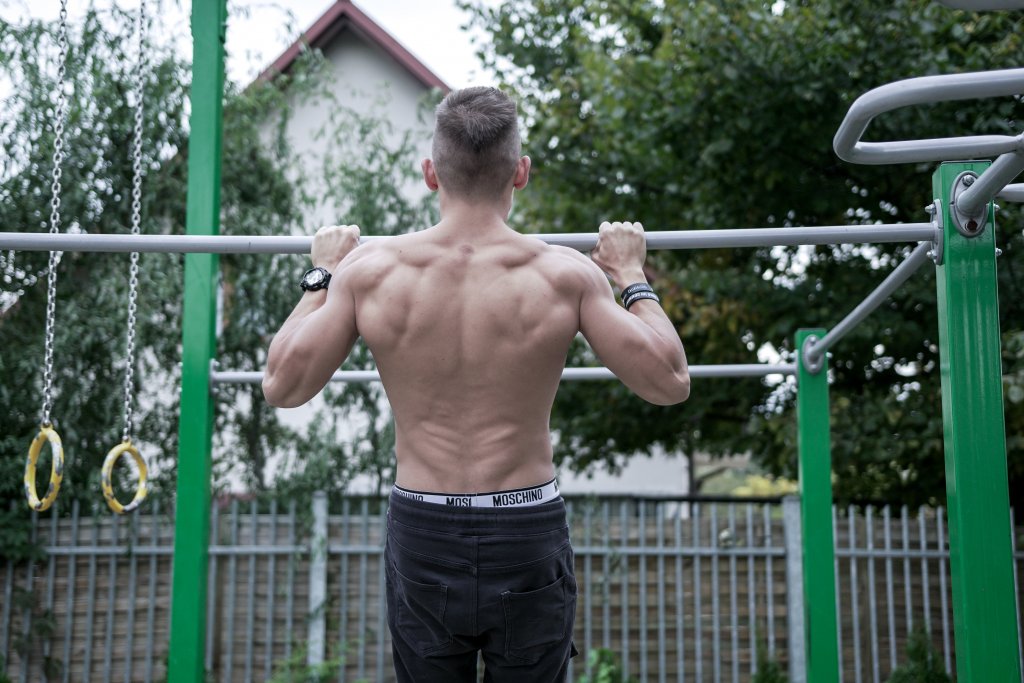 And at last but definitely not least – which muscles work during a pull-up and which performing a chin up? Both pull-ups and chin-ups target the lats, traps and biceps, but it was always said that chinups work biceps harder and the same goes with pull-ups and lats. Recent research shows that the difference isn’t so big as it was originally thought, though. Or rather that the matter is slightly more complicated.

Whether you’ll choose one of the exercises or you’ll just stick to both of them, it’s good to prepare your body for it. Those exercises are not easy to perform, and that’s why they’re sometimes using as an assessing tool – it’s one of the milestones in bodyweight training, being able to perform a pull-up or a chin up as well. So when you’re not there yet, it means that you should make use of one of this preparation exercises. Or all of them for that matter.

And when you’ve mastered the pull ups and chin ups, you can go wild a bit and try some of the grip
variations, such as: