If you’re not new to fitness, you’ve probably come across the words “pelvic tilt” before

While the expression “pelvic tilt” is often misused by athletes needlessly worried about their spinopelvic posture, pelvic tilts can a very real danger which might affect athletes in all fitness categories, calisthenics included. Nevertheless, learning how to tilt your pelvis while performing calisthenic exercises can be a real gamechanger and will ensure you involve the right muscle groups and don’t put excessive strain on your spine when performing certain exercises.

It is a medically recognized truth that good posture is essential for the maintenance of a healthy, functional musculoskeletal system. In the long run, bad posture can cause permanent body posture dysfunctions, and eventually lead to painful medical conditions like lumbopelvic pain.

Before we start, let’s clear up the confusion about what is meant by pelvic tilt. Time to brush up those anatomy 101 skills. 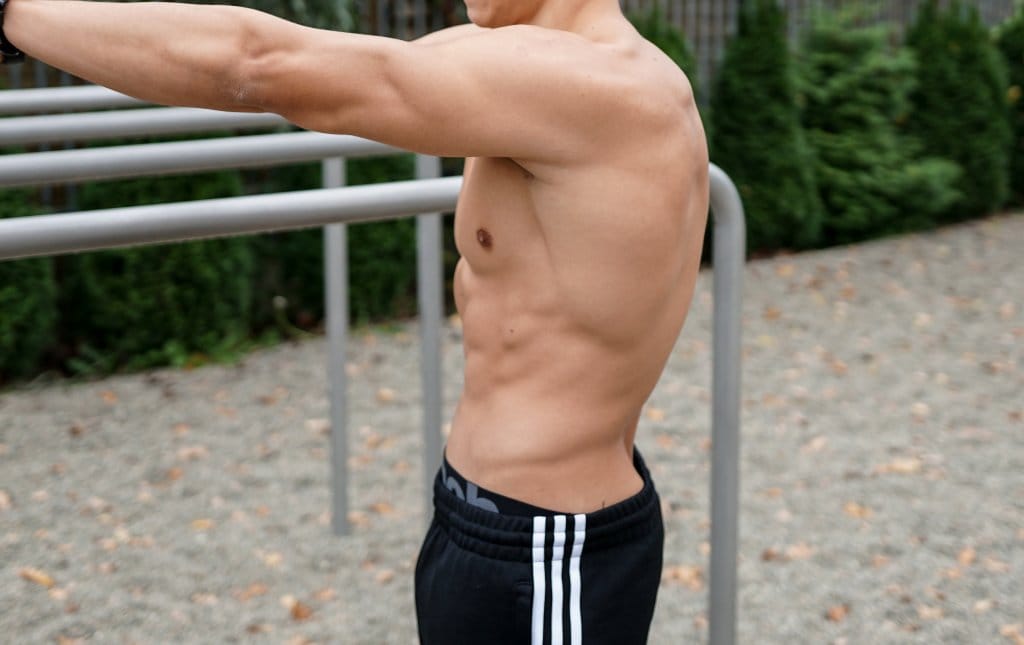 The pelvis is the region of the human body where the trunk meets the legs, home to the hip bone (formed by three parts: ilium, ischium and pubis) and the sacrum and coccyx, two bones at the end of the vertebral column.

These bones together form the so-called pelvic skeleton, point of attachment of locomotion and posture muscles:

When the pelvic bone is in its correct position and angle, we refer to it as neutral pelvis. A neutral pelvis is essential for body stabilization, as it aids ours bodies in maintaining a normal lumbar curve. When we have a neutral pelvis, no excessive strain is put on the hip joint or lower back, meaning chronic pain and risk of injury while training are minimized.

It’s important to note that there is not one single correct angle for the pelvis. The neutral pelvis varies between individuals and having some degrees of anterior pelvic tilt is actually normal: the inclination of the pelvis can range from 6° to 18°, with an average of 12°.

What happens when the pelvis is not in its natural position?

Depending on the axis and direction of the tilt, three macro-scenarios of pelvic tilt can be distinguished:

Because the pelvis is a complex skeletal structure comprised of several bones, it is possible that the angle and axis on which one innominate bone (name for a single hip bone) rotates is not exactly mirrored by the other innominate bone, thus creating an asymmetric rotation.

In case of severe pelvic tilt, a specialized medical practitioner should always be consulted as the excess strain caused by exercises to fix posture can worsen the condition.

Let’s now take a look at the specifics of the anterior pelvic tilt – APT for short –, and which exercises you can perform to fix this type of pelvic tilt and maximize your calisthenics workout.

Anterior Pelvic Tilt: Definition And Exercises To Fix I

As was previously mentioned, the pelvis of most people is slightly tipped forward. It is only when this forward inclination starts causing health and postural problems (protruding belly, curved spine, impaired exercise ability, lower back pain) that the anterior pelvic tilt should be an issue.

The Anterior Pelvic Tilt refers to a permanent forward tilt of the pelvis. It is caused by dysfunctional muscular mechanics, involving weakened glutes, abs and hamstrings, quads, hip flexors and spinal erectors.

With changes in age, our posture tends to worsen as some bones slowly erode and cause skeletal structures to adapt accordingly: vertebral discs become flatter, and eventually lead to thoracic kyphosis (an outward curvature of the spine, commonly known as “hunchback”).

To prevent or slow down this deteriorating process, stretching and muscle strengthening training is essential. Training the above-mentioned muscles (glutes, abs, hamstrings, quads, hip flexors and spinal erectors) will result in more balanced muscle forces, rather than having some muscles overpowering other, weaker ones.

Let’s see which exercises can be beneficial in fixing the Anterior Pelvic Tilt to improve the fitness of the hips and prevent lumbar spine problems:

This calisthenics basic exercise will increase strength in the glutes, hamstrings, and hip flexors.

To perform a correct squat start in a standing position with your feet slightly wider than your hips’ width. While inhaling, slowly lower your hips by bending your knees until your thighs are parallel to the floor. Aim to extend your hips through outward rotation. Maintain your back’s neutral position and use the whole bottom surface of your feet to support your body throughout the exercise (do NOT arch your back).

Exhale and resume the starting position. Start by doing 3 sets of 10-15 reps.

Start in a face upward lying position, with your knees bent. Contract your abdominal muscles and tip your pelvis upward until your back is lying flat against the floor surface. Hold the position for 10 seconds. Do 5 sets of 10 repetitions. You can gradually increase the seconds of holding the position for an extra challenge. Remember to move slowly when restoring the curvature of your pelvis between reps.

To correctly perform a plank, lie face downward on the floor, place the hands palm down on the floor and keep them at shoulder height. Tighten your abs, glutes and thigh muscles. Lift your body to a push-up position and work your way up to 60 seconds of hold.

To make sure this exercise has a correcting effect for ATP slightly tip your pelvis to the front (assume a moderate Posterior Pelvic Tilt position). This is important because without maintaining the right position of the spine, planking can worsen a pre-existing anterior pelvic tilt condition or make you develop it. Remember to keep your buttocks tightened to avoid putting too much strain on your back.

This exercise aims at elongating your psoas major – a muscle located in the lumbar region of the vertebral column attached to the pelvis – and the rectus femoris – one of the four quadriceps muscles of the thigh.

This gym staple movement will strengthen all the gluteal muscles (gluteus maximus, gluteus medius, gluteus minimus) more intensely than the squat will.

To relieve your body from Anterior Pelvic Tilt, you must maintain a neutral position of the spine and push the hips with your glutes, thus taking a Posterior Pelvic Tilt position. Hold this position for longer for a more challenging stretch.

Posterior Pelvic Tilt: What Is It and Why You Should Care

So far, we have seen how Anterior Pelvic Tilt can have a detrimental effect on the musculoskeletal structure of the human body, and which bodyweight exercises you can perform to fix this posture issue.

Conversely, a Posterior Pelvic Tilt (PPT) is a backward tilt of the human pelvis. Often this position is voluntarily assumed because it helps balance the human body in some calisthenic exercises.

The handstand is the most common example of the balancing power of PPT: when performing a handstand, the pelvis naturally tends to tilt backwards, creating the so-called “banana handstand”. To balance this natural biomechanical effect, calisthenic athletes should push with their glutes to tilt their pelvis to the front, in other words they should perform a Posterior Pelvic Tilt. In this case we see that without PPT, it would be impossible to perform a correct handstand, and not employing PPT would increase an athlete’s chances of incurring an injury.

Other exercises involving PPT include the classic plank and its variations, one-arm handstands, back and front levers. Posterior Pelvic Tilt helps balancing your core and it decreases the burden on your abs and waist in exercises like front levers. 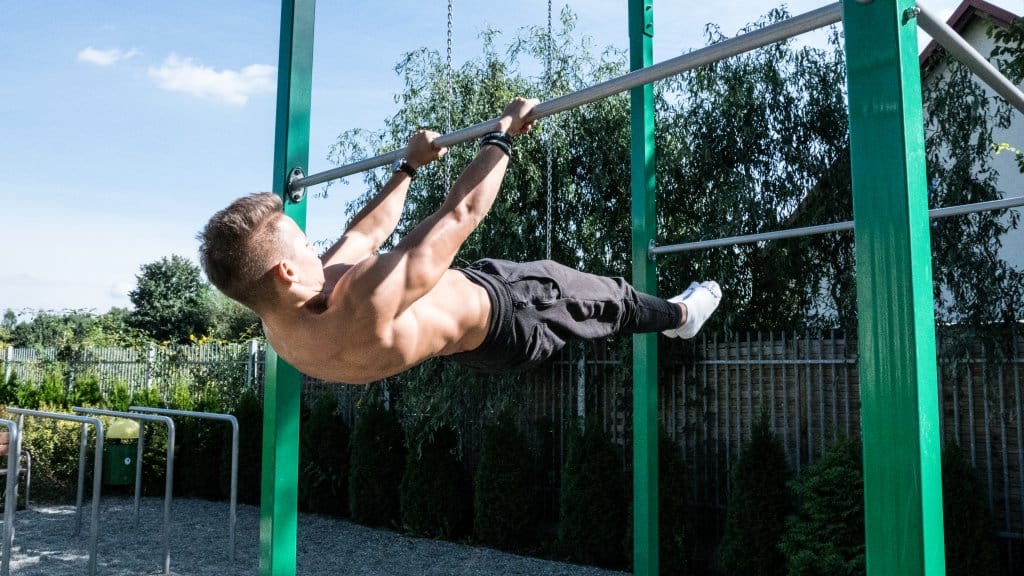 To learn how to implement PPT in your handstand, start by doing a wall stand slowly tilting your pelvis back and front.

If you are experiencing pelvic tilt issues or your current routine leaves you sore or in pain in the pelvic area, you should immediately stop performing exercises and abandon your routine for a few weeks until the functionality of your pelvis is restored

If after a prolonged rest from all exercise the pain still persists, you should consult with a specialist who will properly address the cause of pain and prescribe the most approprate form of rehabilitation for a rapid recovery.

It will be cool if you leave the article or articles here. Thanks man, great information